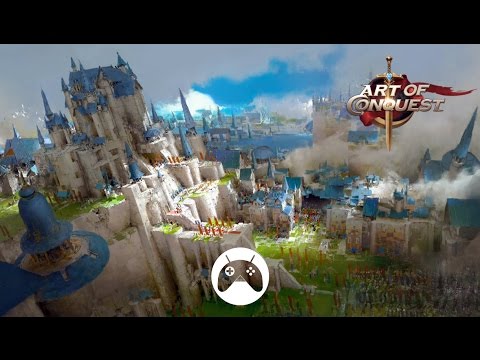 Patreon:
*Thank you for your support! ART OF CONQUEST Gameplay by Lilith Mobile

A new genre of real time strategy gaming you have never experienced before.

Engage in large-scale battles with in-depth strategy – Carefully arrange your troops and Heroes to achieve victory without suffering too many casualties! Plunder your enemies’ resources carts and defend your own resources in real-time PVP battles when your enemies attack your carts!

Build up your Dwarf, Lich or Human castle, train your troops and build siege machines to storm other players’ city walls. Move your headquarters to different regions to occupy and annex them into your kingdom.

More than 20 unique Heroes await for your commands. Level up your Heroes’ special abilities as well as your troops’ properties in the tech-tree. In Art of Conquest, you will encounter over 100 different kinds of units of 5 unique races, enemies of 6 kingdoms and mighty bosses to fight.

A world of mystery and magic is yours to explore!

– Unlike other strategy games, Art of Conquest gives you REAL BATTLE, REAL CONTROL
– Engage in large-scale strategic battles with more than 500 units on the screen
– Choose from three playable races: Humans, Lich, or Dwarves (and more to come!)
– 18 heroes each with unique skills and properties, recruit or battle against more than 100 different units
– Test your skills in huge BOSS-FIGHTS
– Real-time PVP Battles against players worldwide, meet allies and enemies as you uncover new lands
– Challenge thousands of players around the globe in your quest to secure resources and expand your territory
– Besiege other player’s cities with catapults and other war machines.
– A vivid and expansive magical world to explore and occupy

Intro Song: All I Need by Valesco
*The links contain ads, but they’ll lead you to the Playstore/Appstore. If you want to support me use this links, if not, you can search google for the download links. Thank you!
#newMobileGames #AndroidGames